In most drivers’ lives, traffic is an inevitability. For commuters, that inevitability happens on a daily basis. However, the expected nature of traffic does not make the traffic any less annoying. In fact, drivers who sit in heavy traffic regularly demonstrate negative emotional health effects—including stress and aggression—that are directly related to the traffic. The traffic in San Diego County is some of the worst traffic in the world. A statistic from 2017 ranked San Diego as the 45th most heavily trafficked city in the world—out of 1,360 cities in 38 different countries. San Diego County commuters spend an average of almost 70 hours per year stuck in traffic. The average resident of San Diego County spends more than 10% of their time driving sitting in traffic. Easily, there are advantages of the Chevy Bolt EUV for all drivers in San Diego County.

If you have to spend so many hours of your life every year stuck in traffic, wouldn’t it be nice to at least make those hours a little more worthwhile? If you are sick of being bored out of your mind while stuck in traffic and are in the market for a new vehicle, consider choosing the 2022 Bolt EUV from Chevrolet as your next vehicle. The 2021 Chevrolet Bolt EUV carries one great advantage that can help San Diego County drivers feel less stressed about the time they spend in traffic.

Keep reading to learn more about Chevrolet’s revolutionary Super Cruise semi-autonomous driving system that will be featured in the 2022 Chevrolet Bolt EUV—the all-new, all-electric crossover vehicle from Chevrolet that will make its appearance on the mainstream auto market sometime in 2021 for the 2022 model year.

Chevrolet’s Super Cruise driving system is a Level 2 semi-autonomous driving system. Super Cruise qualifies as a Level 2 system because it enables your vehicle to brake and accelerate on its own as well as drive straight and stay in its correct lane without driver intervention. These capabilities allow for hands-free driving over hundreds of thousands of miles of highway throughout North America.

Super Cruise has every official highway in the United States pre-mapped out and is able to be used while you are driving along any of these highway stretches—highways are defined by Super Cruise as highways that feature an off-ramp and an on-ramp. 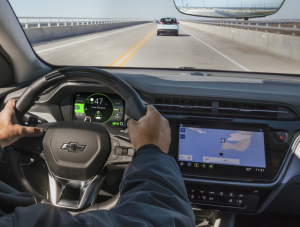 When enabled, Super Cruise uses real-time cameras, sensors, GPS, and LiDAR precision map data to virtually drive your vehicle for you on compatible roads. It is able to slow your vehicle down and speed it up in response to traffic conditions, bring your vehicle to a complete stop when necessary, and keep your vehicle centered in its proper lane even around tight curves—without any driver intervention. Super Cruise even enables your vehicle to make autonomous lane changes. Just flick your turn signal on while Super Cruise is enabled, and the semi-autonomous driving system will perform a single lane change in your desired direction as soon as it is safe to do so.

This anti-distracted driving feature on the Chevy Bolt EUV prevents drivers from sleeping, texting, sitting in the backseat, or being otherwise away from the wheel or distracted without looking at the road ahead of them while Super Cruise is enabled in their vehicle. Also, although Super Cruise’s anti-distracted driving feature prevents drivers from looking away from the road for too long, this feature does not require drivers to keep their hands on the steering wheel while Super Cruise is enabled.

Even if you don’t sit in traffic for hours every day of your life, the Chevrolet Super Cruise system that’s on the Chevy Bolt EUV is still a revolutionary technology that can help take the stress out of your everyday driving.

If you’re in the market for a new vehicle and want to take advantage of all the driving benefits the innovative Super Cruise system has to offer on the road, check out the 2022 Chevrolet Bolt EUV when it hits a Chevrolet dealership near you.