When shopping for a new car items like style, color, and accessories are all part of the equation, but reliability is always at the top of the list. Over the past few years, the Japanese automakers have taken the spotlight for being reliable and affordable across their various makes and models. So it’s not surprising that Mazda would end up as the most reliable line of cars in the US. Mazda has not only competed with the American Automakers but has been in direct competition with the other major Japanese car manufactures like Toyota and Honda. Toyota and Honda have also appeared on several best car lists and have gained a foothold in America, leaving Mazda behind. Despite that, Mazda has become the fifth largest manufacturer in the world and has created several lines of cars that compete at a variety of class levels.

Who Is the Most Reliable Automotive Brand?

Consumer Reports ranked Mazda as the most reliable automotive brand. Consumer Reports puts the automobiles they test through a variety of evaluations. They look for everything from how comfortable the automobile is to performance and safety features. After thorough testing of a variety of brands including both foreign and domestic, Mazda was awarded the title of most reliable.

Most people are probably familiar with the Mazda brand through the RX-7 and their infamous rotary engine. Mazda has come a long way since they first hit US shores in 1970 and their line has continued to grow. Mazda’s current lineup goes far beyond the 2 seat sports cars that brought them worldwide fame. While the RX-7 was one of the most coveted cars of the 70s and 80s, it was the Miata that brought Mazda into the mainstream American consciousness. The little jelly bean-shaped car that came in a variety of colors was the dream of every high schooler and mid-life crisis middle American. These two little cars brought Mazda tons of recognition, but the fact that Consumer Reports found Mazda reliable as a whole product line brings them even more into the forefront.

Did Mazda Score Well In Other Categories?

While Mazda scored well in the reliability, safety, and other categories, it also performed very well in the consumer satisfaction category. This category is of course important for any manufacturer as it provides evidence that you are headed in the right direction. Car consumers are always willing to air their complaints and even file complaints when something goes wrong. And for good reason since automobiles represent one of the most expensive purchases you can make in a lifetime. So not only did Mazda perform well in all the tests that Consumer Reports could run them through but they also did well in that most coveted of categories, the overall consumer satisfaction survey. 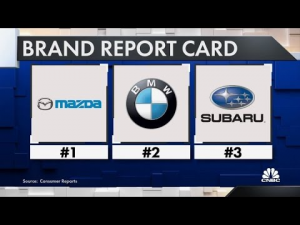 Mazda has grown its North American product line over the last 40 plus years. Through partnerships with Ford Motors and then later striking off on its own design themes, Mazda now has a robust offering for consumers of all tastes. Mazda’s CX line offers consumers a variety of SUV-type vehicles that range in size from the entry-level and smaller CX-3 all the way up to the much larger, and more appointed CX-9. And of course, all of these lines are available in a variety of trim levels to suit a variety of tastes. Outside of their SUV line, Mazda has delved into the sedan market with a plethora of options. The Mazda 3 and 6 sedans offer consumers a solid vehicle in direct competition with stalwarts like the Honda Accord and the Toyota Camry. The Mazda 6 sedan offers trim levels that take it up to a luxury type of vehicle with the top-of-the-line Signature edition. Mazda also still offers their Miata lineup in an MX-5 version and an MX-5 RF version with both Club and Grand Touring trim levels available.

Mazda also stands out as not only the Consumer Report’s most reliable category but also was selected as a top safety pick by the Insurance Institute for Highway Safety (IIHS). Mazda has also been recognized by the IIHS for the past several years. One of the reasons Mazda received this award was its active sensing technology that utilizes radar and other technologies to keep drivers aware of their surroundings. In addition, their cars have pre-collision technology that surrounds drivers and passengers in a safer environment should a collision occur.

Mazda has come a long way from its early manufacturing days to its first ventures into the North American market, which is the company’s largest. Mazda used to be considered that “other” Japanese auto manufacturer that wasn’t comparable to the larger and more successful Japanese companies like Honda and Toyota. But much of that perception has changed over the past decade or so as Mazda has continued to innovate and offer a more robust line of cars than in previous decades. Now with a most reliable accolade under their belt, Mazda will be a top choice among consumers for years to come.

Where to Buy Your Mazda in Escondido

To schedule your next test drive of one of the award-winning Mazda vehicles, visit our brands from the site and click on the Mazda dealership.